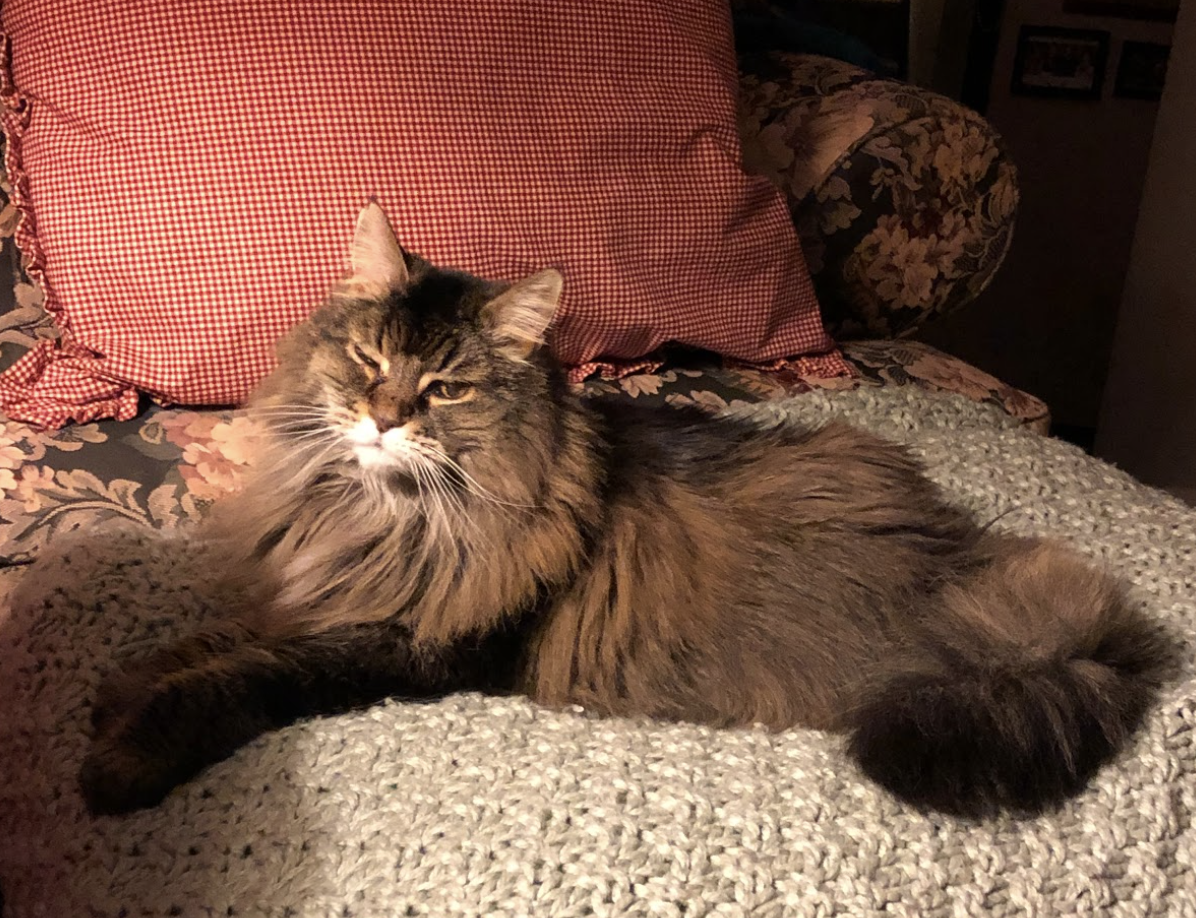 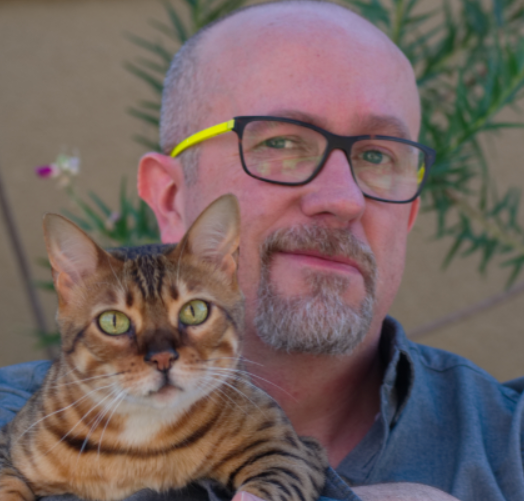 Cats have so many admirable qualities, but let’s be honest and admit that humility isn’t one of them.

Your typical feline is all too aware of how deeply, disarmingly beautiful they are. For evidence, just check out that self-satisfied glint in a cat’s eye when the morning sunlight sets its fur a-sparkle. Cats know they have it going on! And yet somehow, that self awareness only deepens their charm. How do they do it?

Setting the mysteries of cat-kind aside for a moment though, it’s time to meet Mallory.

As you can see, Mallory is a cat who knows how to show off her assets. Look at that fur! Her devoted human, Susan, tells us that Mallory is a purebred Maine Coon, living her best life despite being just a touch — ahem — long in the fang.

“She is a bit of a prissy cat, and very much a lady! Mallory has a very regal air about her, and she knows she is a beauty. :)” 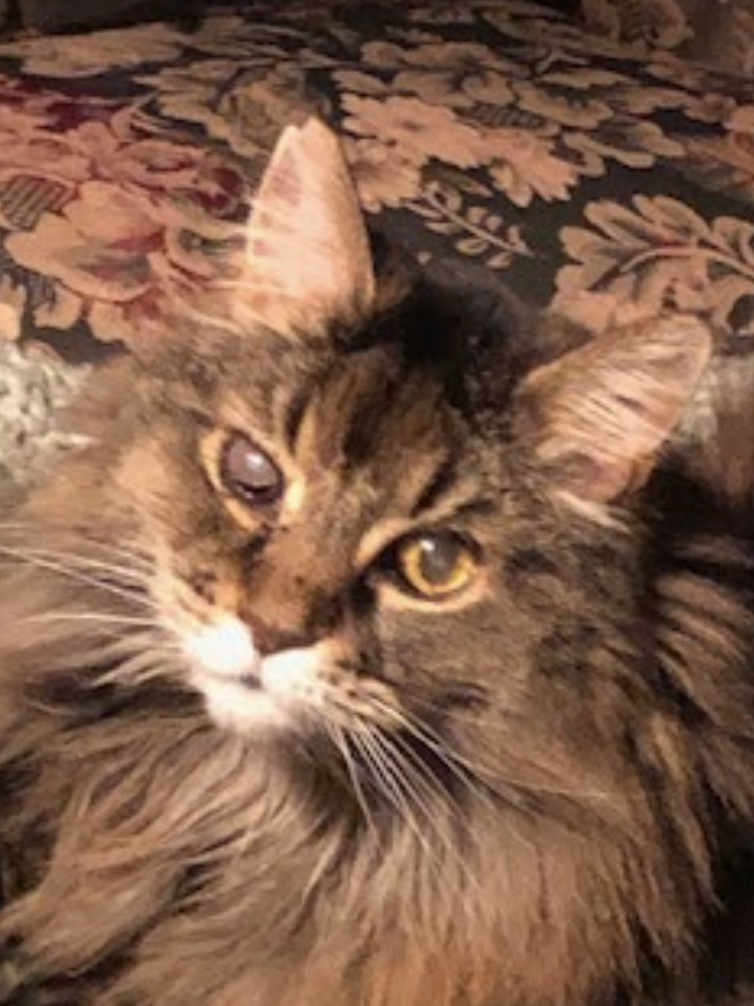 Like most cats who have lived a little, Mallory is a creature of impeccable refinement, and more than a few … well … let’s call them eccentricities, shall we?

Very much the matron of the household, Mallory will melt into a purring puddle of happiness when Susan brushes her coat. She politely tolerates human visitors to her domain, but she adores Susan with all her cattish heart. And then there’s that regal air of hers, which only slightly softens when she decides to goofily pounce on her favorite fluffy ball, bunny-kicking it for good measure.

Yep, Mallory is a complex lady.

And no prizes if you already guessed this next revelation: When it comes to food, she’s a tiny bit fussy. She enjoys a mixed diet of canned and dried foods, and lets Susan know — in no uncertain terms! — when she desires a little more variety. Like many older cats, Mallory can be a challenge to keep happy at meal times.

A few years back, Mallory hit a rough patch. It came on gradually, but Susan began to realize that her regal companion, then aged fourteen, was struggling.

It started as a few bathroom mishaps. Mallory’s occasional incontinence puzzled Susan, but she knew something was really wrong when Mallory lost her appetite and became lethargic and withdrawn.

Susan did the right thing and whisked Mallory off to a vet.

“It wasn’t good news. Mallory’s kidney level function tests were elevated, and the vet diagnosed her with advanced age chronic kidney disease. He explained that the problem would require careful ongoing treatment.”

It’s always tough to learn when a family member faces health challenges. But feline kidney disease is especially challenging because there are no quick solutions. Helping an older cat with the condition requires patience, and a commitment to careful diet and lifestyle management. It was a stressful situation for both of them. 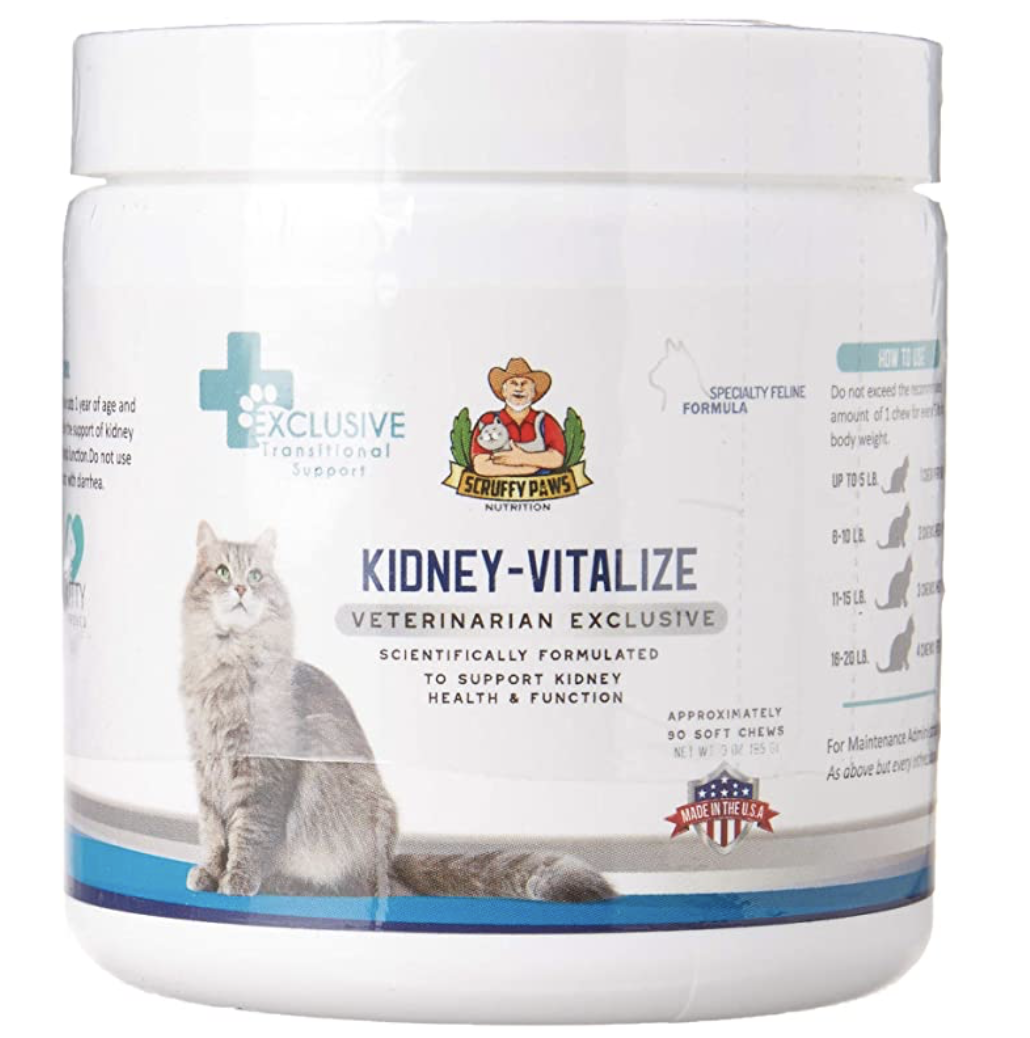 Fortunately for Mallory, Susan was up to the task!

Susan took to the Internet, read exhaustively around the causes and treatment options of feline chronic kidney disease, and eventually found the Scruffy Paws Website.

She realized she’d found a dietary supplement that was formulated, from the ground up, to help cats in exactly Mallory’s situation. She decided she’d order our Kidney-Vitalize Chews in the hope that it could be part of a solution for helping her fussy feline friend

“I figured I had nothing to lose! And I would do anything to help my girl.”

It took time to get Mallory on an even keel. At first, Susan found that Mallory was reluctant to try new foods, and she had to get creative. After some trial and error though, she found that if she broke the chews up into smaller chunks and mixed them into her favorite food, Mallory would happily eat them.

Before long, Mallory made the adjustment and would happily scoff the treats down.

Mallory began to turn a corner.

It wasn’t an instantaneous transformation, but Susan noticed a bit more flesh on her bones. Her coat regained some of its former luster. Then, finally, Mallory’s energy levels began to return. One morning, Susan just knew that her friend had regained her happiness.

Cats are smart that way! If you watch them closely enough, they’ll tell you how they’re doing.

Sure enough, her vet confirmed that Mallory’s kidneys had returned to normal function.

That was three years ago. This September, Mallory will hit her seventeenth birthday. She’s still queen of all she surveys, and her loyal subject Susan is just happy to have her sweet old friend by her side.

“As long as she is keeping weight on and healthy I'm just keeping her happy. Many thanks for your product!! I adamantly believe that you've given me extra years with my girl.”

Please send Mallory our many happy returns, Susan! She sounds like a force to be reckoned with. 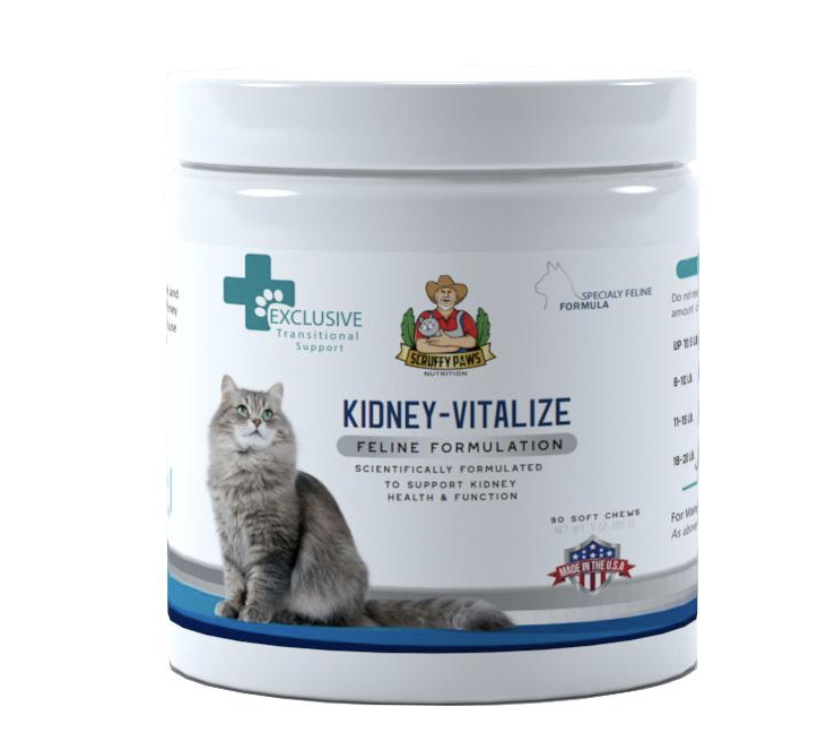 the purrr-fect way to support your cats kidney health

Grab a jar for your kitty today

When to Take Your Cat to the Vet

No cat or dog parent wants to deny their beloved...

This article is Part One of a two part series...

This article is Part Two in a two...

The Dietary Needs of Outdoor Versus Indoor Cats

Outdoor cats and indoor cats are the same cutely...

What Is Feline Dental Disease?

While cats are generally healthy and robust creatures, diseases...

Hairballs: What They Are and How To Manage Them

There probably aren’t too many people out there who’d disagree...

Vitamin B12 Deficiency in Cats: What It Is and Why it Happens

Cats are unusual. They’re remarkably robust in some ways, but...

Vitamin B12 Deficiency in Cats: Treatment and Management Options

This is the second article in a two-part series focusing...

The Three Essential Ingredients for a Happy, Healthy Cat: The Kitten Years

There aren’t many folks out there who don’t want to...