Meet Nicholas! An Old Boy With a New Lease on Life

One thing almost every cat lover knows and loves about their feline friends is that they have this amazing knack for becoming a vital part of our daily routine. Masters of observation and avid devotees of the art of finding comfort in the strangest of places, cats have this sublime gift for inserting their needs front and center into their doting human’s daily pursuits.

Anita is one of our loyal customers, and her fiercely cute tabby, Nicholas, is no exception.

Anita took Nicholas into her home when he was just three weeks old. Daily bottle feeding in those early months, combined with their natural deep rapport, soon made Anita and Nicholas completely inseparable.

As with so many human-cat relationships, the daily routines of their lives became wrapped around one another.

Whether napping together on the sofa or taking a leisurely stroll around their garden, Nicholas made sure Anita always stayed safely in his eye-line. It took time and patience from Nicholas, but in time Anita became the perfectly trained human — always ready to offer a choice meal, a scrumble behind the ears, or a long and leisurely brushing — all when Nicholas deemed such human affections acceptable, of course!

Those early weeks of bottle-feeding happened a long time ago, and Nicholas is now a very old boy indeed. At 19 years of age, he and Anita have almost two decades of deep companionship behind them.

It’s hardly surprising then that Anita was worried when old Nick started drinking an unusual amount of water, his appetite started to tail off, and one by one, their daily routines started dropping away.

She just knew it. Something was wrong.

A quick trip to the vet revealed that Nicholas had elevated creatine levels — a sure sign that, as with so many older cats, Nicholas was beginning to experience the onset of kidney disease.

It was a shock to the system to realize Nicholas wasn’t doing so great, but Anita did the right thing by her friend.

She spoke to her vet, did her research, and realized it was time to begin building new routines and food behaviors — daily additions that would help Nicholas stay healthy and enjoy life to the full for as long as possible.

It was then that Anita found us!

After a late night of learning about feline kidney disease and the importance of diet for older cats, Anita found herself on the Scruffy Paws website. She saw that we sell a scientifically formulated supplement, specifically designed for cats with kidney issues. 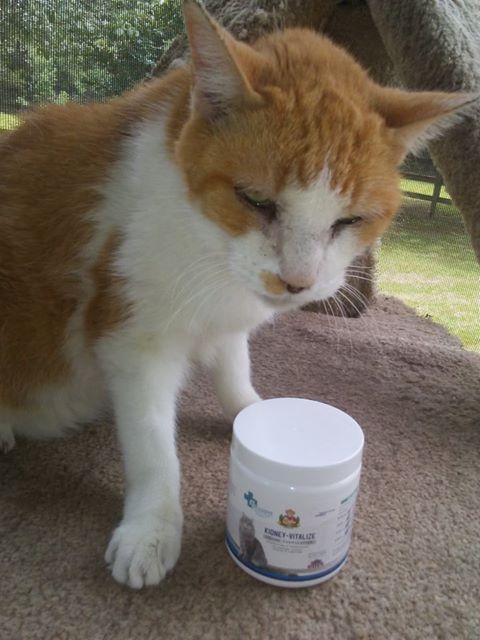 Just as importantly, she also realized she wasn’t alone.

Anita describes that moment as one of excitement mingled with relief. After reading through our blogs on kidney disease and caring for an older cat, Anita realized she wasn’t the only cat-lover looking for answers. She understood that older cats have special dietary needs and that, quite often, a supplement can work wonders.

Anita decided she’d take the plunge. She’d buy a pack of our Kidney Vitalize chews and see if Nicholas approved.

“I found out about Scruffy Paws Nutrition from a Social media post. I saw that you strictly dealt with scientifically formulated cat supplements, so I decided to get Nicholas started on a quality kidney supplement.”

(I know.. a fairytale story right?)

But that didnt stop Anita, she knew that the Kidney Vitalize Chews could help her best friend, so she tried every trick in the book to get her kitty to eat them.

And eventually, her persistence worked! Nicholas was chowing down on the chews and getting the Kidney support he needed.

Weeks later, Anita took Nicholas back to the vet for follow-up blood work. Sure enough, his creatine levels were down. She had already noticed that her friend’s energy levels and passion for life were returning too.

His creatine levels went down to within normal ranges. He eats a lot better. He is always wanting something to eat so I gladly give him what he wants. He also gained some weight. I couldn’t be happier!”

Today, Anita’s and Nicholas’ lives have returned to normal — from daily play times, to that afternoon wander around the garden, to spooning up together on the sofa in the evening to enjoy some quality TV time.

Anita reports that she’s ecstatic about the results of Kidney Vitalize, and we have a feeling she’s doing a happy dance to see her friend of nearly two decades doing so well. Anita’s words say it all, really:

Naww! Congratulations, Anita! Thanks for giving Scruffy Paws Kidney Vitalize a try, and please send Nicholas our warmest regards. He sounds like one of this world’s true gentlemen.

The purrr-fect way to support your cats kidney health Chronic Kidney Disease: A New Way for Kitty to Live